From its inception, the driving force behind the Pentecostal Assemblies of Canada has been church planting. Our forefathers believed that this would be the last generation before the return of Christ. Even as the church was born in an outpouring of the Spirit, so would it be raptured while in revival. As in the first century, so in the last, this renewal would result in the conversion of people and the creation of many local congregations. To that end they prayed and laboured.

Their vision came from the Scriptures. When Jesus said to go and make disciples, He provided the Gift of the Holy Spirit as the power for effective witness. He said He would build His church. As Pentecostals, we have demonstrated that the “power from on high” is the method the Master uses. The apostles went with an anointing to announce the Good News. Congregations came into being as Pentecostal power penetrated the population centers of that time. And so it continues.

Our charter of 1919 states three very significant purposes for which we exist: “to conduct a place or places of worship; to organize and conduct schools of religious instruction; to carry on home and foreign missionary work for the spread of the gospel.” We began with the vision to reach the lost.

This vision was continually cast in every means of communication. The first issue of the Pentecostal Testimony in December, 1920, contained a letter by the Secretary-Treasurer, R. E. McAllister, in which he spoke of the “opening up of new Assemblies”, and further stated, “Pastors and Assemblies ought to take this phase of the work to heart and lift an offering at least once a year for this very important work. Only as we extend the home work are we in a position to care for the Foreign Missionary enterprise, and we have demonstrated in the past that a hundred dollars spent wisely in the opening up of Home Missions under ordinary conditions will result in a hundred per cent increase to the Foreign work within a year. Every Home Mission opened in turn becomes a factor in the Foreign Missionary enterprise.” This statement was followed by a listing of the current churches within the Fellowship. There were 27.

By May 1, 1939, the Pentecostal Testimony was able to report over 300 assemblies affiliated. There were 190 ordained ministers and 52 missionaries. Over a full page was given to report a new church opening in Paris, Ontario. With two pages devoted to missionary news, another two pages reported on church revival and growth in Canada, and yet another full page was an appeal for a Home Mission outreach. The vision of church growth was continuing to carry the new Movement forward.

It is our firm belief, that this same vision is still at the heart of our Fellowship, and still the motivation behind our momentum. We have called the 1990’s our Decade of Destiny. In accordance with the faith and foresight of our forefathers, the Pentecostal Assemblies of Canada has articulated its Mission Statement as “to make disciples everywhere by the proclamation and practice of the gospel of Christ in the power of the Holy Spirit; to establish local congregations, and to train spiritual leaders”.

In 2019, with over 1,100 churches now being affiliated, this vision is still at the heart of our Fellowship: 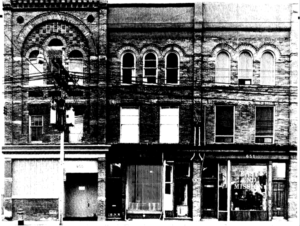